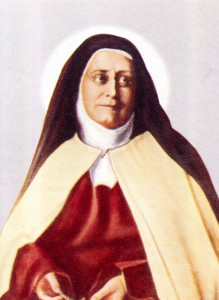 Rev. Mother Mary Teresa Veronica
Foundress of the Congregation of the Carmelite Religious
(1823 – 1906)

We, the Congregation of Carmelite Religious, are women consecrated to God, with Our Lady of Mt. Carmel as our Patroness. We are committed to the cause of education, in response to the charismatic inspiration of our foundress Mother Mary Theresa Veronica of the Passion.

Mother Veronica (Sophie Leeves) was born of Anglican parents on 1st October 1823. The atmosphere of love at home culminated in her outstanding love for God which was expressed in her tendency to serve the helpless, the afflicted and the sick. She was well-educated and highly accomplished in the fields of music and art, with a mastery over Greek, French, German and her native English. This full-fledged woman dedicated herself to educate others less fortunate than herself.

She was a woman of strong faith and prayer. Her intense desire for the Real Presence led her to embrace the Catholic faith and move onwards into religious life, first as a Sister of St.Joseph of the Apparition and later as a Carmelite.

It was on 16th July 1868 that she founded the Apostolic Carmel- a Carmel for the Missions – in real poverty at Bayonne, France. It was here that she began moulding young girls into Religious Sisters to work in India.

The first batch of Sisters arrived in Mangalore in 1870. It was from here that the Carmelites gradually spread to the Malabar Coast where there was need for Catholic education. By 1880 the Congregation took root at the Holy Angel’s Convent. Trivandrum, from where it has spread its branches in India and abroad.

Following in the footsteps of our Master Jesus Christ and our foundress Mother Veronica, we impart fullness of life through our apostolate of education and social work. We reach out to all God’s children especially girls, women and the marginalized. We strive to produce intellectually competent, morally upright, socially committed and spiritually inspired persons who are responsible and available for the greater service of the country and of the world.